Life in the Balance

I cannot weigh 2009 in a balance and come up with any semblance of equality or tipping.

The hurts were deep, but the joys were soaring. And to say that one would outweigh the other is not going to work. Life just doesn’t work that way.

I get a visual of a giant hand shaking a tray of hilly sand. Once shaken, it all levels out. As a literary device it might work for some illustrations, but not for the emotions and spiritual lessons of a year like 2009.

Death was waiting at the doorstep in January. And yet in February, a job of mammoth proportions was given out.

Anxious waiting and financial stresses. And yet the year ended with two new grandsons, beautiful and healthy.

No, you can’t shake this year down and make it level. But my favorite Bible verse still applies. I love it. I cling to it. I repeat it even when I don’t believe it.
Romans 8:28 (NASB) And we know that God causes all things to work together for good to those who love God, to those who are called according to His purpose.

Out with the old. In with the new. And trusting God for making me into the image of His Son!

Right Around the Corner 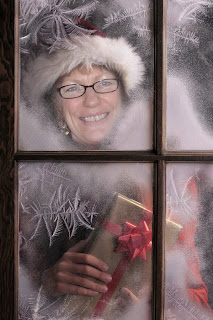 2010 is waiting on my doorstep. I think I want to open the door to see it. But right now I just don't have the time, and I'm running in circles, doing and not doing stuff. Both the "doing" and the "not doing" are causing me anxiety.

"Just stop it!" I say. Doesn't work. "Pray" I say. Does it work? Is it supposed to "work"? That sounds rather formulaic to me.

Prayer is communication. Private, personal, supposed to be two-way, if I would just listen. So part of prayer is silence? Maybe that's what I've been missing. The listening part.

Prayer, blogs, Facebook...it's all a pouring out. The soul stretched out for all to see. Except for the prayer part. My soul is always stretched bare for God to see. The difference is that He sees the REAL me, not the one I'm trying to show others. The "got it together" person. Or the "always anxious" person. He sees who He made me to be...who I am right now...and the chasm - or gap - between the two.

When I write, I realize that others could be reading it. And so everything is couched in preaching to myself and either encouraging, exhorting, or entertaining others. But with the Heavenly Father, there's none of that.

He strips the anxiety away to show what is lying beneath it: a broken relationship (or one on the brink), desires that are ungodly, perceived needs that aren't being met (translation: selfishness), words that are left unspoken out of fear of rejection. It amounts to a big pile of nothing in eternity, but a big pile of useless fretting here.

So in about a week, my door will open to a new decade. That is if God gives me breath for the next week. And at that time, I'll really try to stop and listen. Listen to the prompting for what He intends for 2010 in my life. Given His propensity for gift-giving, love, power, justice, etc, I shouldn't be too anxious, should I?
Posted by Rhonda at 12/26/2009 07:20:00 AM